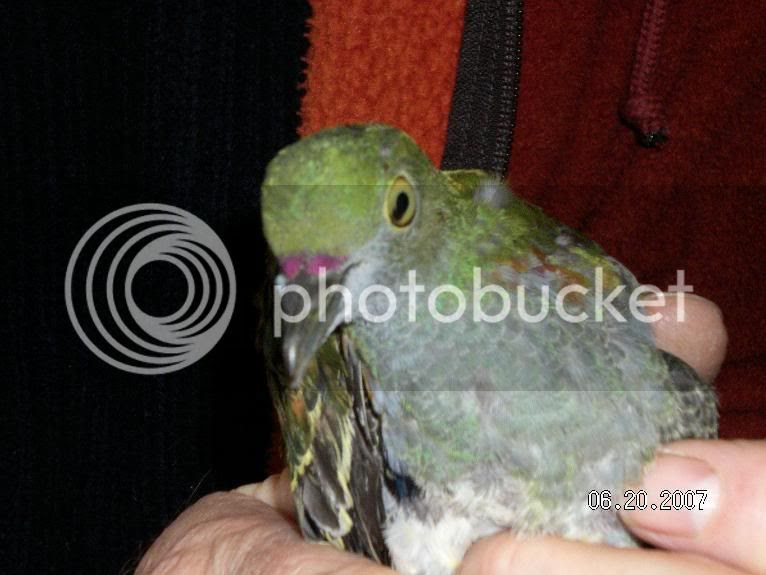 An injured bird, unable to fly, is a concern to most of us. Last Wednesday (20 June) Peter Stevens of the Wolli Creek Preservation Society came across one on the Undercliffe Track in the Wolli Valley. With the help of fellow member, Judy Finlason, who lives nearby, a light towel was thrown over the bird, which was then lifted carefully into a box. Quick reference to a bird identification guide suggested that it was a native Fruit-Dove. “This made it a real rarity this far south” an excited Peter said.

On the advice of WIRES, the volunteer wildlife rescue group, the bird was taken to a local vet, in this case Peter Nicholl of the Earlwood Animal Hospital. The two Peters were able to take a few photos of the bird to aid identification before the bird was collected by local WIRES carer, Chris Lloyd, a bird specialist. The bird has a badly injured and bloodied wing, with many feathers missing and, even with antibiotics and intensive attention, it will be several months before it can be released, provided its wing recovers sufficiently. 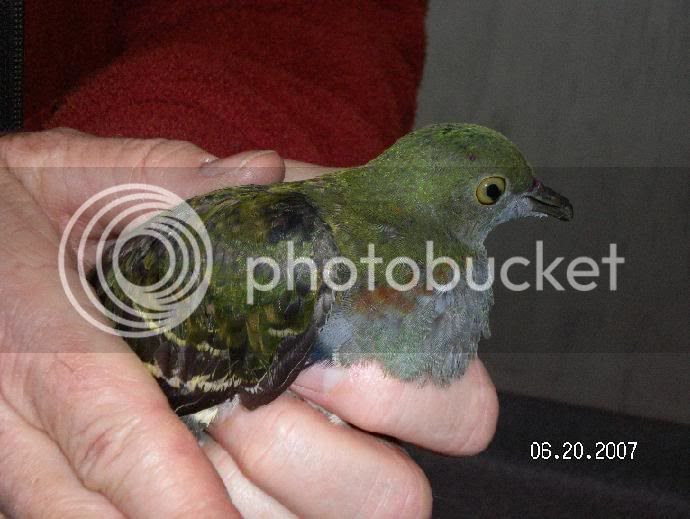 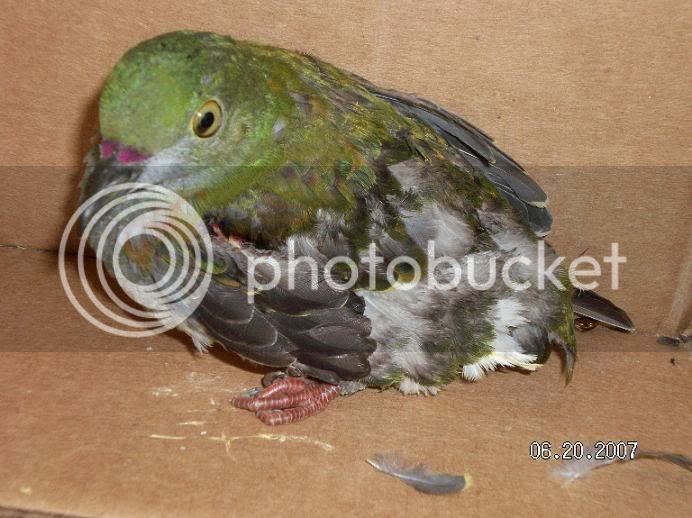 Experienced ornithologists have agreed that this a first-year male Purple-crowned (Superb) Fruit-dove, never before reported in the Wolli Valley. Alan Leishman of the Society advises that the bird has only been recorded in the Sydney region about 20 times since 1953 and only once before that (in 1876!). “This bird would be considered to be an uncommon one in the Sydney region and the current specimen probably on migration”, Alan said. These Fruit-doves possibly occur more often than the records indicate, as they are difficult birds to see while quietly feeding among the outer foliage of berry-bearing trees, often high up. “This is such an interesting find”, Peter Stevens said. “While a cautious stance is entirely appropriate – it could be an aviary escapee after all – this may add yet another bird` to the 176 species reported in the Wolli Valley since 1940.” And it comes on top of another find – only the second reported sighting of Tawny Frogmouths in the valley since 1940. Chris Lloyd reports that, based on its behaviour, his young patient is unlikely to have been an aviary bird, but may be young enough to have still been partially dependent on its parents. “This is an even more exciting possibility”, Peter Stevens says, “since it could mean that the birds have bred in the Valley, once again underlining the major regional significance of the Wolli Valley bushland.”

Fifty hectares of the Wolli Valley, including most of its bushland is finally about to become a Regional park under the National Parks and Wildlife Service over the next few months. “We keenly hope that the Fruit-dove not only recovers, but can be released back into the Wolli bushland.” Peter Stevens concluded.

Our bird expert assessed the situation as follows: "I would identify the bird in the photographs as a 1st year male Superb Fruit Dove, Ptilinopus superbus. The identification is based on the colour of iris, colour of feet and general plumage. The age is based on the general plumage, I am not able to check the shape of the outer primaries or the wing coverts or the shape of the rectrices, it would be necessary to have the bird in the hand to do this. The colour of the legs and feet are more like the adult colour that the true juvenile colour of grey-horn. The sexing is based on the colour at the base of the bill and the slight colour on the flanks of the shoulder.

Superb Fruit Doves nest between June and February (Handbook of Australasian and New Zealand Birds Vol 3) thus making this specimen at least 4 months old, probably is slightly older. The Handbook of Australian Birds states that this species commences its post juvenile moult when 70-90 days old, hence the wash of colour on the flanks of the shoulder.

As far as records for the Sydney region "The Birds of Sydney" states that:

“On 16 May 1953, an immature bird was found dead near Epping. This was the first record of the species near Sydney since 1876 when two birds were collected at ‘North Shore’. Of 17 known occurrences [up to 1989] at least eight birds were killed flying into windows. Possibly occurs more often than the records indicate as it is a difficult bird to see while quietly feeding among the outer foliage of berry-bearing trees".Two birds were recovered dead in 1992, one in Sydney and one in Wollongong. This bird would be considered to be an uncommon bird in the Sydney region and the current specimen probably on migration."Another source reports: "WIRES east branch has had 1 superb fruit-dove and 2 rose crowned fruit doves (or vice versa) in the last 18 months. They may not be as uncommon as thought."In 2002 a Superb (purple-crowned?) Fruit-dove hit a window at Twyford Avenue, Earlwood and died. Young male starting to moult. As at June 2007 it is kept frozen in The Australian Museum, College Street, Sydney.

The dove is fine to date and has been moved out of intensive care into a small hospital aviary. It has completed its antibiotic course but still requires two crop feeds a day. The latter indicates that it was likely to be still dependant on adults for crop milk. While it does not like human contact and has little understanding of cage wire it does seem to accept crop feeding - this may indicate captive breeding though I still doubt this. The next step for the bird is feather regrowth - it has no retricies and is missing most of the left primaries and secondaries. It will then become clear if it has full use of the carpal joint.Standard Operating Practice for WIRES with birds in this catagory is freezing and delivery to the Aust. Museum - presuming they don't make it.

"Its weight fluctuated substantially for a week until the tell-tale signs of a 50mm tapeworm appeared. Having lost this burden it is now much more active and weighs in at 88g (it came in at 80g). The left wing is currently bandaged as it consistently opened the damaged flight feather folicles and lost blood.

This bird is seriously lucky to be alive when the full extent of the injuries are totalled up. The tapeworm is interesting in that its size indicates the bird had it prior to the injuries which begs the question was the debilitation from the nematode the reason it was on the ground and therefore attacked.It still shows no inclination to self feed no matter how many Californian cherries are chopped up for its delectation. So it gets 2 crop needles a day."

The latest update from WIRES:

The Fruit Dove has maintained a stable weight at 94-98grams for the past few weeks. It has put new primary, secondary remiges out but many of these are damaged and mis-shaped. This is not unusual and often reflects folicle damage that may repair on the next molt. We will have to wait to see whether there will be sufficient feathers for flight and therefore release. If the damage to the left wing folicles is more serious it may mean plucking and another wait. If the damage is permanant then I think our patient will be surrendered to the tender mercies of Taronga. Until it has sufficient feather development for flight its a little academic.

I have sourced adult calls and will start play these into its cage though it remains relatively wild anyway. Still has a marked preference for Californian cherries unfortunately! It would be very useful if any of your members could identify native fruits in the Wolli valley that we could transition the bird on. Its wild preference is for fruit in the 5-15mm diameter particularly dark red-blue - sounds like a privet eater but could also be Port Jackson figs. Any help in this area would be greatly appreciated.

The fruit dove was moved to a larger aviary a few weeks ago and is doing well but still has some problems with the coverts and flight feathers of the left wing. These may be permanant and would prevent the normal range of movements for wild behaviour. Its is now colouring up nicely. 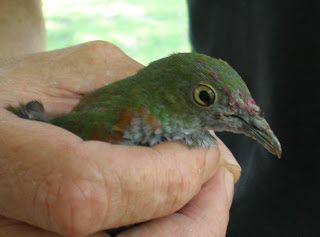