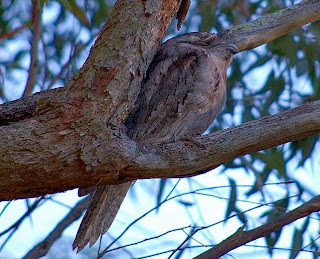 Tawny frogmouths, an owl-like night bird have been rediscovered in the Wolli Valley, after an absence of at least 38 years. A pair of the cryptic pigeon-sized birds has recently taken up residence in Girrahween Park where they were spotted by sharp-eyed Voren O’Brien of the Wolli Creek Preservation Society.

“These birds are Australian icons, imitating broken grey branches to remain unseen. Seeing them in the Wolli Valley so close to Sydney’s centre is a special thrill”, Voren said. Records of bird species seen in the valley since 1940 are available in Birds of Wolli Valley, published by the Preservation Society last year. They show a single sighting of a frogmouth between 1940 and 1969 and none since. The book is based on the research, personal observations, and meticulous records of the legendary Wolli birdo, Neil Rankin, between 1970 and his death in 2001.
Tawny frogmouths are relatively common in bushland around Sydney but have probably only recolonised the Wolli Valley very recently. The birds are active at night, hunting small animals such as mice, frogs and insects. By day they roost on branches close to a tree trunk where their bark-coloured plumage makes them almost invisible to an untrained observer. 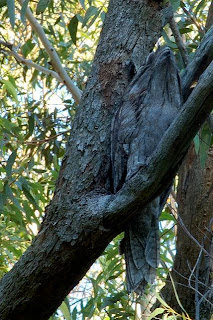 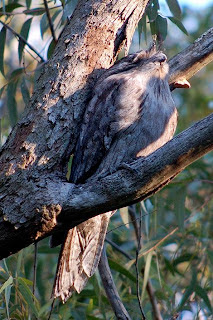 Photos by Jon O'Brien
Posted by Wolli Birds at 12:20 AM